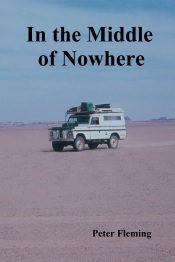 A Land Rover is the star of this book. Assembled from parts of various scrap Land Rovers found on dumps in Oman it emerged as a very functional four-by-four camper. In 1980 the author and his girlfriend Dawn loaded up the Rover and set off from Oman with the aim of driving back to the UK but with no positive idea of the route that they would take. Gathering information and advice from other travelers along the way they ended up driving across to Egypt then down through Sudan,  across The Central African Republic and back up across the Sahara Desert to Europe.

Back in 1980 there was no Internet or SatNav or GPS and there were no mobile ‘phones or ATMs. No email, text, Facebook or Twitter. However, parts of Africa were much more accessible and peaceful then than they are nowadays.

This book is the the story of the five month journey of two ordinary people and their extra-ordinary vehicle.

In the Middle of Nowhere is available in both ebook format and paperback.

Simply Google search <peter fleming, in the middle of nowhere>

Also, if you are lucky enough to live in the Wellington area of New Zealand the paperback version may be borrowed from the Paraparaumu library or the Waikanae library.

Note that the Kindle ebook and paperback contain many black and white photographs. The ebook in other formats, and also the hardback, contain photographs in full colour.

All royalties from the sale of this book in any format are being donated to Medecins Sans Frontieres. 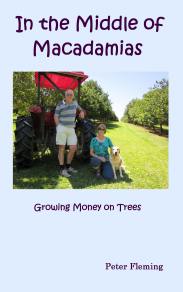 Many people pipe dream of making drastic changes in their lives.  But to give up their job, home and security and follow a star to pastures new will remain just a dream for most, despite the temptations of a plethora of TV programmes extolling the wonders of the ‘sea change’.

It was the start of a fascinating and rewarding ten years.

Illustrated with many photographs, ‘In the Middle of Macadamias‘ tells the story and is now available through Amazon in both ebook format and paperback.