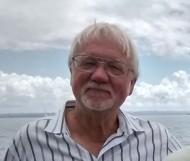 Peter Fleming was born in Peterborough, England, in 1946.

He completed a student apprenticeship there with Baker Perkins Ltd and gained a Higher National Diploma in Mechanical Engineering. He moved to British Steel in Sheffield and specialised in the design of hydraulic and pneumatic equipment for the steelworks.

Two years later, and encouraged by his then wife Maureen to seek work overseas, he was recruited by the British Aircraft Corporation to train as an instructor on the tracking equipment associated with the Rapier low level air defence missile system. This training was to qualify him to join a field team in Iran in support of a contract to supply Rapier to the Imperial Iranian Air Force. Accompanied by their then very young son Mark, Peter and Maureen spent just over two years in Iran.

After a year back in the UK working for BAC in Stevenage, Peter took an unaccompanied position as a support engineer on a new Rapier contract with the Sultanate of Oman. This was to last for four years. Sadly during this time his marriage broke up. At the end of his contract he drove back to the UK in a Land Rover and this journey is the subject of his first book  ‘In the Middle of Nowhere’.

Finally arriving back in the UK, a few months of relaxation ended when he answered an advertisement offering ‘A challenging career with worldwide travel’ and found himself training to be an oil well surveyor with an American service company.  This resulted in a two year period in Saudi Arabia. During this time and whilst on holiday in Australia he met his second, and happily current, wife Claire and they moved back to Norfolk, England where Peter worked in the North Sea oil industry. After a couple of years, however, the unpredictable demands of the job led Peter to turn back to BAC – now British Aerospace – in order to seek a more stable lifestyle. It was a fortuitous time as BAe had just signed a Rapier contract with Indonesia and needed someone with Peter’s experience to join the support team in that country.

So followed two years in Indonesia followed by six months in Brunei.

Back to the UK and twelve rather tedious years mainly office-bound working for BAe in Stevenage.  This came to an end when he was invited to join a small, private defence support company as the Engineering Manager. The result was five enjoyable years between office and workshop, indulging himself in the refurbishment of Rapier and other military equipment, together with trips to Egypt to promote the company there.

Yet again the temptation of travel and a desire for a complete ‘sea change’ led Peter and Claire to sell up in the UK and move to Australia, a period of their lives which is recounted in Peter’s second book ‘In the Middle of Macadamias – How to Grow Money on Trees’.

After ten years in Australia Peter and Claire finally decided to retire to New Zealand where Peter’s son Mark and his wife Nicola were living and working. They are now comfortably settled and enjoying the retirement lifestyle.

Click on the following link to listen to a half hour interview with Peter on Coast Access Radio, New Zealand.